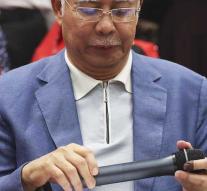 kuala lumpur - The Malaysian police have searched the home of former Prime Minister Najib Razak, who lost the election this month. Police officers, among other things, took handbags, clothes and other personal belongings, said the politician's lawyer.

The police entered the house after Najib returned from a visit to the mosque. 'They searched the entire house. Maybe they were looking for documents or something similar, 'said the lawyer. He stated that nothing was noteworthy, even though the agents took several boxes of stuff with them.

A senior police official said that other places were searched that were associated with Najib. It is still unclear what the authorities are looking for. Najib's lawyer said the police indicated that there was a case of money laundering.

Najib has also been linked to alleged abuses concerning the 1MDB state fund. Billions would have disappeared from that fund. The lawyer of the former leader said that issue had not been raised during the invasion.