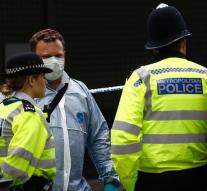 london - British agents arrested another three men in London in the investigation of London Bridge attacks and Borough last Sunday. That made the police known in the English capital on Wednesday on Thursday.

British security officials arrested the three men in the eastern neighborhood of Ilford. Two of the men are suspected of preparing terrorist activities. The third suspect has been arrested for possession and trafficking in drugs.

Earlier Wednesday, the police had arrested a thirty-year-old man in a house in the same district.