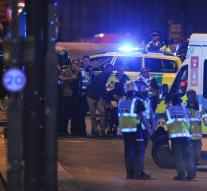 london - The London police have labeled two violent incidents of Saturday night as terrorist acts. It is about the London Bridge incident, involving a bus on passers-by and a sting incident in a restaurant in the nearby Borough Market entertainment district.

A third incident in Vauxhall is separate from the two other incidents, according to the London police.