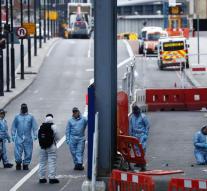 london - The recent terrorist attacks in London and Manchester, committed by Islamic extremists, are estimated in Britain. The biggest threat the country is facing now does not come from abroad, but is of its own. This has stressed London's police commissioner, Cressida Dick, on Monday.

Dick confirmed that the police know who were the three perpetrators of Saturday's attack. The three were shot by the police after attacking a massacre in central London. In addition, seven died and nearly fifty injured.

In March, May and June there were attacks in central London and Manchester. In addition, according to the current count, 35 killed.