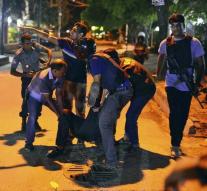 dhaka - Police in Bangladesh believe that a Canadian and an officer in the army of Bangladesh are behind the bloody attack on a restaurant early last month. There is a reward put on their heads.

Seven armed men attacked in an expensive neighborhood of Dhaka, a popular restaurant with foreigners inside and kept the visiting hours hostage. She eventually killed twenty visitors, and two police officers. At the storming of the building six kidnappers were slain.

The two suspected organizers, it is a major layoffs and a Canadian of Bangladeshi origin who came to Bangladesh three years ago.