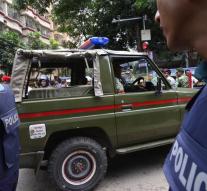 dhaka - The Bangladeshi police suspect that she had shot one of the hostages in ending the hostage in a restaurant in Dhaka, assuming that it was a terrorist.

It involves Saiful Islam Chowkidar, a pizza baker Holey Artisan restaurant. He was one of six men who were slain when police stormed the restaurant after a twelve-hour siege, said a police officer involved in the investigation, Saiful Islam.

During the hostage killed the terrorists twenty people, almost all foreigners.