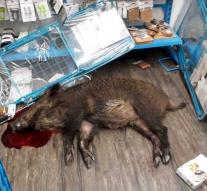 puttlingen - The police in Püttlingen, Germany, shot a wild boar running wild in a discount store.

The wild animal had first frightened the shoppers in a boutique and then kept their house in the discounter.

Because it is not possible to catch the pig in a net, the police decided to finish the pig.