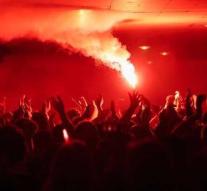 kiev - For the duel between Dinamo Kiev and Ajax, the police of the capital of Ukraine arrested nine supporters. They were involved in a fight around a café.

On images you can see that supporters storm a bar with Ajax fans. They also threw fireworks. Then there was a fight. The police did not reveal the identity of the detainees.

Ajax has warned the supporters that have been traveling since Monday night for fans who are looking for problems. That did not all go well. The supporters of the club from Amsterdam first called on their own supporters via social media to go to Palas Ukraina. Ajax apparently had not taken into account that the advice also ended up with malicious fans. That is why the club advised its own supporters later not to go to the conscious square in the center.

Just before the match, Kiev supporters tried to reach Ajax fans in the stadium. The police knew how to prevent that. Kiev put in 1500 agents around the game. Earlier this year around the final of the Champions League between Real Madrid and Liverpool in Kiev broke big riots between English fans and hooligans from Ukraine.