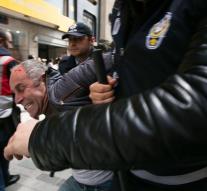 istanbul - The police in Turkish Istanbul came to action on various places in the city on Monday against people who wanted to protest for Taksim Square before May 1st. She excited the protesters with tear gas and rubber balls and picked up more than two hundred people. According to the governor of Istanbul, 40 molotov cocktails, seventeen hand grenades and 176 pieces of fireworks were also seized.

The Taksim Square is a traditional gathering place for protests against the government, but it has now been declared to be illegal for protesters. Demonstrators who wanted to go there were chased by the police in the Mecidiyekoy district. Also in the Besiktas district, dozens of people were arrested.

There was a lot of police in the whole city. From the sky, protesters with helicopters were monitored.