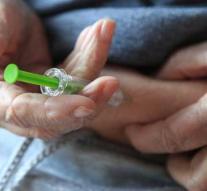 munich - The German police believe that a Polish nurse who is suspected of having killed a very elderly patient with insulin may have more hair follicles. After a nationwide call, the police discovered at least four cases of very old people who died while the Pool worked in the institution concerned.

The 36-year-old male nurse was arrested in connection with the death of an 87-year-old patient in Ottobrunn near Munich. This died after a fatal injection of insulin. During the house search, the police found two bank cards with pin codes from the victim.

Meanwhile, it is being investigated whether the Pole also dealt with more deaths in the regions Forchheim and Kitzingen in Bavaria and in Hanover and the Tuttlingen region (Baden-Württemberg). The police emphasize that the investigation has just begun and warns against 'convictions in advance. '

It is not the first time that a nurse in Germany is associated with the death of patients. In Oldenburg, the court is preparing the trial against a male nurse who would have killed about a hundred patients.