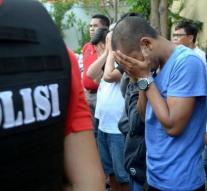 jakarta - The police in Jakarta arrested 141 men on Sunday evening at an invasion of a gay club. Ten people among whom the owner and some staff members of the club are suspected of 'violation of pornography laws.' The rest is still being questioned.

On pornography in Indonesia there are strict penalties, up to fifteen years in prison. For the download of pornographic material four years of imprisonment or 135,000 euros can be imposed.

Homosexuality is not prohibited in Indonesia, the country with the largest Muslim population in the world. The community of gays, lesbians, bisexuals and transgender people is under pressure, however, after government officials annoyed the activism of its members last year.

In Aceh, two men were sentenced to public detention last week. In the ultra-conservative province of Sumatra, in addition to national criminal law, the Islamic law applies and sex between people of the same sex is punishable.