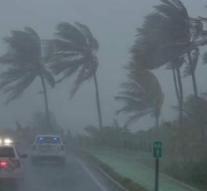 miami/fort lauderdale - The Miami police are investigating, in their own words, robberies in the city in the aftermath of Hurricane Irma. Deputy police chief Luis Cabrera said to the Miami Herald that four people have been arrested on Sunday evening.

Sunday night, the warning against 'hurricanes' in southern Florida was withdrawn, but many neighborhoods or neighborhoods such as Miami Beach remain temporarily closed due to the flooding and are not accessible to residents. The hurricane Irma is currently in force in the west of the state.

Before the arrival of Irma, numerous districts have been evacuated and as a result of the storm, more than three million households have no power, while streets are empty. Power supply repair can take weeks, fearing the affected power suppliers.