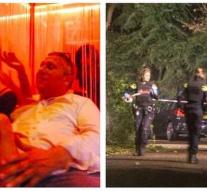 amsterdam - The police arrested the 24-year-old Zakaria A. from Utrecht in prison on suspicion of the liquidation of Martin Kok. The crime blogger was liquidated on 8 December 2016 at the door of sex club Boccacio.

It is the second arrest in the case. Earlier, a business relation of Kok, who was present at the liquidation, was also arrested but later released. He remained suspicious.

A. is probably also the man who earlier on the day of 8 December already wanted to attack Kok. That was when the Martin Kok wanted to leave a hotel. Surveillance cameras then recorded how an unknown person pointed a gun at the back of his head. When the weapon refused, the shooter ran off running.