Home / Tech / Police have the best website in the Netherlands 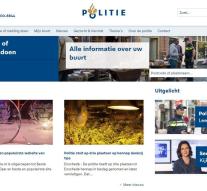 amsterdam - The Netherlands police have the best website. Politie.nl Wednesday named website of the year. The people who cast a vote, said it was " brief, clear and informative website," says the online magazine Emerce, one of the initiators of the prize.

Voters can give a figure for the appearance, ease of navigation and content of the site. She was also asked whether they would recommend the site to others. The voters did not look at the building site behind the scenes. In August police. nl hours unreachable. It was first thought to be a cyber attack, but later found out that the site from the air went by too large photo that was viewed simultaneously by many people.

It is the ninth time the prize is awarded. Comparison site Tweakers Pricewatch won last year. The main site of it, Tweakers, in 2009, 2011 and 2012 the best site. Other winners include Google search engine, profile site Hyves, online household accounts Yunoo and language website Better Games.

The Website of the Year is an audience. Approximately 576 000 people have this year voted on websites in 24 categories. By category were to win two prizes: the best site and the most popular site. From that group the prize winners was calculated.

The election is an initiative by online market research and online magazine Emerce MetrixLab.