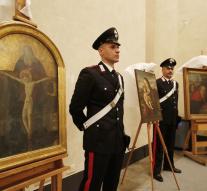 - Three fifteenth-century paintings that were looted by the Nazis in 1944, have been found in Italy.

The paintings were part of an art collection of the House of Bourbon-Parma and were stolen by the Germans from a villa in Tuscany. There lived the husband of the Grand Duchess of Luxembourg, Prince Felix.

After the war, most of the stolen art was recovered and returned to Luxembourg. Forty canvases, however, remained missing.

One of the paintings is found Trinity Alessio Baldovinetti, a Renaissance painter. The canvas' Jesus presented in the temple of the famous miniaturist Girolamo Dai Libri was recovered. The works do not return to Luxembourg, because all compensation paid. A museum in Milan has taken pity on the canvases.