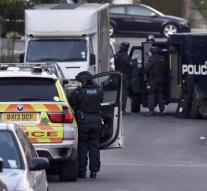 london - Police in London Sunday night arrested the man who had since Friday in a house fortified with potentially large quantities of flammable materials. Reported channel Sky News.

As a precaution were evacuated about eighty people in London's Northolt. The police tried to negotiate with the man who had barricaded himself in the house. When the talks yielded nothing, it was decided to enter the house.

According to police, there was not a terrorist act, but this was a confused man.