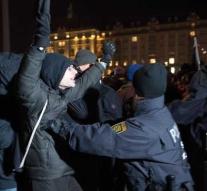 dresden - The police prematurely ended a protest meeting of neo-Nazis in the center of Dresden on suspicion of incitement. The demonstration at Postplatz was organized by Holocaust denier Gerhard Ittner, who has a criminal record because of his racist and anti-Semitic sympathies.

A complaint was filed against two speakers, the chief commissioner announced Saturday night.

Ittner got the request to scratch his big anger and that of the participants. He made the agents for 'traitors' and wanted to attack them. Trawants stopped him. Ittner did not speak for himself because he is still running a criminal case.

Approximately 200 right-wing extremists had come down on the demonstration. It quickly went wrong. When they called in the Nazi time the German song, the police immediately switched off the power of the sound car. After the crowd had dispersed, a group tried to march to the Frauenkirche with counter-demonstrators threatening to move around. The police stopped them. Eventually 81 people got a restraining order for the center of Dresden.