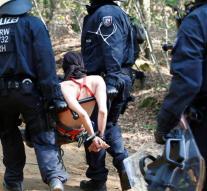 kerpen - The German police have arrested fourteen people on Sunday against the eviction of the brown coal forest \u0026 # x27; near Hambach, between Aachen and Cologne. Eight people were injured in the protests, including three police officers, the police reported.

Thousands of environmentalists demonstrated Sunday for the preservation of the forest. The exact numbers vary. According to the police, about 4000 people were on their feet. The activists themselves spoke from 5,000 to 9,000 participants. Especially at the end of the afternoon the tension increased. About two hundred protesters then invaded a part of the forest that had been deposed by the police.

Agents started Thursday dismantling the dozens of tree houses in the forest. Activists kept the place occupied for years. They try to prevent energy company RWE from cutting down the forest to win brown coal.