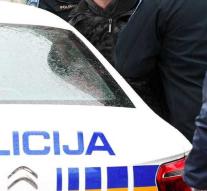 zagreb - At least two children were injured when the Croatian police opened fire on a van with migrants. The driver of the vehicle refused to stop, message news site index.hr.

Agents had tried in vain to stop the driver. They opened fire when the car drove through a roadblock near Srb, near the border with Bosnia and Herzegovina. Shortly after that, the van stopped. The driver got out and fled into a forest.

Police officers discovered 29 migrants in the vehicle. Two children were injured, but their condition is probably not life-threatening. It is still unclear what the origin of the passengers of the van is, that possibly crossed the border illegally.

Earlier this month, a similar incident occurred in Belgium. There, a toddler died after the police had shot in a chariot full of migrants during a chase.