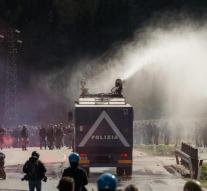 brenner - A demonstration against the closure of the Austrian Brenner Saturday ended in violent clashes with Italian police. Agents put under more tear gas against hundreds of protesters who threw in their turn with stones and fireworks. Two officers were injured.

According to the Austrian authorities, there were more than six hundred demonstrators on the leg. It was the third time in a month time a protest at the Brenner Pass ended in violence. They gathered at the Italian railway station and a TV were shown images of an entrance hall full of smoke. The protesters, who wore masks against the smoke, pelted officers with stones and smoke bombs. Austria had three hundred agents ready, but all the unrest took place on the Italian side of the border.

Austria wants to place a fence at the Alpine pass to counteract the influx of asylum seekers. The Italian newspaper Corriere della Sera reported earlier this week about the planned protest, which was organized by an anarchist group from the northern Italian city Trento.