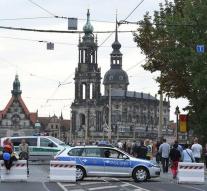 dresden - In the eastern German city of Dresden on the night of Saturday to Sunday, three police cars on fire. It is not known who the arsonist or what could be the motive. Thursday afternoon was a fake bomb found under a major bridge over the Elbe. On Monday there were two bombings in the city, one in front of a mosque and the entrance to the convention center.