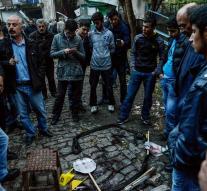 - Saturday shot dead powerful Kurdish lawyer Tahir Elçi has been hit by an agent. The policeman fired on fleeing people who shortly before had attacked other agents. It claims a representative of the Turkish pro- Kurdish opposition Monday.

Elçi was Saturday in his head shot in Diyarbakir, the capital of the Turkish-Kurdish region. The lawyer with forty activists gave a press conference in which he pleaded for peace when the group was fired upon. His death has caused much fuss. The chief prosecutor of Diyarbakir reported that members of the police and prosecutors who were investigating at the scene of the shooting, Monday had to flee when they were taken under fire by militants. They opened fire and throwing explosives into an armored police vehicle. Elçi was arrested in October after he had said on television that the militant Kurdish separatist PKK is not a terrorist organization. He was at liberty awaiting trial. Tempers between Turks and Kurds run high since there came to an end in July with a two-year truce between Turkey and the PKK. The Kurdish movement demanding more autonomy for Turkey's Kurds.
NEW