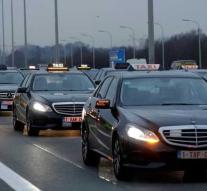 brussels - The Belgian police have distributed nearly a hundred coupons to campaigning taxi drivers. The angry drivers received an official report on or around the Brussels ring road because they maliciously interfered with traffic and for other violations, according to Minister of Internal Affairs Jan Jambon.

The taxi drivers were busy all day in and around the Belgian capital to cause as much traffic as possible. They blocked entrances and exits and hindered access to Zaventem airport. The protest campaign was organized by the Belgian Taxifederation (Febet) in anger against Uber, the internet company that mediates between travelers and drivers.

According to Jambon, there is a right to action, but also the right to free passage for those who want to work. The traffic police, supported by helicopter images, had the task to act against drivers who passed the letter.