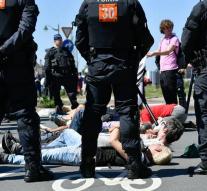 brussels - The Belgian police arrested a total of 128 protesters demonstrating against NATO and US President Trump on Thursday. A fortnight climbed viaducts over the Brussels route to bend banners, while ninety protesters arrested crossing the NATO headquarters where the NATO summit was held.

The manifestation at the ring resulted in traffic on the highway with some minor accidents. The protesters at the crossroads at NATO had permission to argue but refused to leave when their promised time- until two hours before the start of the summit- had expired. They hoped to block President Trump's passage, but that took another way.