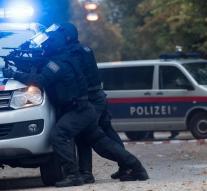 vienna - The Austrian police on Thursday raided in search of terrorist suspects in Vienna and Graz. It would be a large-scale action, which has been prepared for weeks.

The Austrian Interior Ministry did little to lose. According to Austrian media, there are eight hundred officers deployed. The newspaper Kurier reported on its website that ten people have been arrested.

The operation was unrelated to the recent arrest of a seventeen year old boy who is suspected of preparing a terrorist attack in Vienna. According to the Kurier coming suspects from the former Yugoslavia have been longer monitored. They would have been planning to build a radical Islamist organization. The Kronen Zeitung reported that it involves, among other followers of hate preacher from Vienna, who last year because of terrorist association and incitement to murder was sentenced to twenty years in prison.