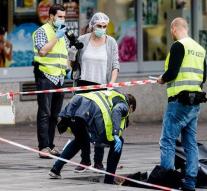 hamburg - After the knife attack at a Hamburg supermarket, the German police searched an asylum seekers center in the Langenhorn district. That would have been the 26-year-old attacker.

The man from the United Arab Emirates (UAE) killed a 50-year-old customer in the supermarket on Friday and six other people were seriously injured. His motive is still unclear. The police said nothing about the results of the search in the asylum seekers center on Saturday morning.

The man in the supermarket with a kitchen knife had stuck on customers on Friday afternoon and was subsequently taken on board. Others chased the attacker and could overthrow him.

The newspaper Tagesspiegel reported on the basis of security officials that the suspect was known as Islamist. He should have left the country, but could not be deployed because he had no papers, said Mayor Olaf Scholz of Hamburg. The SPD politician said that makes him very angry. 'That this perpetrator is apparently someone who seeks protection from us in Germany and then hates us. '