Home / World / Police action in the French port of Brest 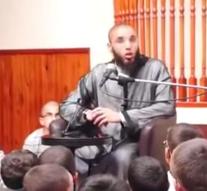 brest - French police have raided in the night from Thursday to Friday in the Sunna mosque in the Breton port of Brest. That report French media.

It is still unclear where the action was aimed precisely. The imam of the mosque would not have been present. The police action is around 06. 00 completed again.

Rachid Houdeyfa, the imam of the mosque Sunna, came out earlier this year compromised. He told a group of children that people who listen to music, monkeys or pigs will change.