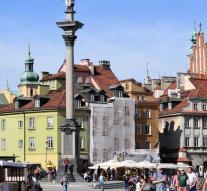 warsaw - In Poland, the polling stations open Sunday for local and regional elections. The elections are an important indicator of the popularity of the government of the conservative party Justice and Justice (PiS), which regularly conflicts with the European Union.

According to the polls, the party of former Prime Minister Jaroslaw Kaczynski can count on a victory regionally. The sixteen provinces of the country are currently governed by opposition parties, but in many of the so-called voivodships PiS is in the headlines.

The party, which has ruled Poland with an absolute majority since 2015, is under attack in Brussels because it would undermine the rule of law. In December, the European Commission initiated the so-called Article 7 procedure because of PiS 'control over the case law. The committee has also put the country before the European Court to force it to reverse the reduction of the retirement age for judges of the Supreme Court. As a result, 27 of the 72 judges are replaced.