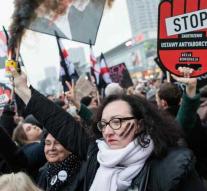 warsaw - Tens of thousands of Poles have taken to the streets to demonstrate against a possible tightening of abortion legislation. Protesters gathered in the vicinity of the parliament building in Warsaw and the headquarters of government party Law and Justice (PiS).

The demonstrators turn against a draft proposal to further limit the right to abortion. Women can now break off a pregnancy if a fetus is irreparably damaged. The parliament talks about a proposal to ban that.

Opponents of the plan took to the streets on Friday. It was about 55,000 people in Warsaw, said a municipal spokesman. The police kept it at 20,000 demonstrators in the capital. Thousands of people also expressed their dissatisfaction in other cities.

Demonstrators wore banners with inscriptions such as 'women are human beings, not incubators'. ' I do not want women to be treated as an inferior type of human, '' said a 58-year-old demonstrator in Warsaw. 'I support the right of women to decide for themselves what they do with their bodies and lives. ''