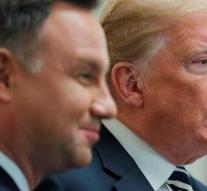 warsaw - US President Donald Trump says his country is considering permanently alloying military personnel in Poland. He made that statement during a visit by his Polish colleague Andrzej Duda, who stated that his country is willing to pay with the arrival of such a basis. He will then also receive the name Fort Trump.

Trump responded with interest to the proposal. He stated that the Polish government is willing to contribute more than 2 billion dollars (more than 1.7 billion euros) to building costs. 'If they want to do that, then that's definitely something we'll talk about,' the American president said.

Trump said he would like to see rich countries pays for the presence of American troops. That would be talked about with 'numerous countries', although he did not mention it by name. Poland is eager to get an American base, because the country is suspicious of Russia.