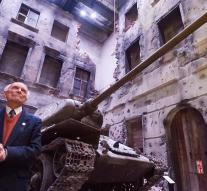 gdansk - After much wrangling is open Thursday in the Polish city of Gdansk Museum of World War II. The approach of the museum is disputed by the right-wing government of Prime Minister Beata Szydlo.

The museum focuses on the suffering of the civilian population in wars. According to critics, the museum is insufficient in the Polish struggle against the Nazis. Museum director Pawel Machcewicz said Thursday that there is to strive to provide the fullest possible picture of the war.

The government will, however, join the new museum with a museum application to the Westerplatte peninsula and changes. Here lawsuits are passed over. The initiative for the establishment was made in 2008 under the government of then Prime Minister Donald Tusk. The Gdansk coming from Tusk is now the President of the European Council and quarreled with the government in Warsaw.

World War II began in Europe with the attack of Nazi Germany on September 1, 1939 on a Polish base at Westerplatte in Gdansk coast. Poland was almost three weeks later attacked by the Soviet Union. Of the estimated 35 million inhabitants survived at least 6 million Poles not the war.