Home / World / Poland is tacking: pension judges are being scrapped 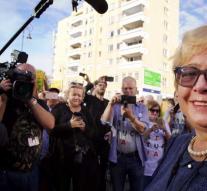 warsaw - After fierce criticism from the EU, Poland has provisionally abandoned the controversial reform of the Polish Supreme Court. The ruling party of Law and Justice (PiS) will publish a proposal on Wednesday to virtually nullify the reform.

The party will adapt the legislation to bring it in line with a ruling of the European court. Dag had bent over the reforms in the Polish judiciary and demanded that pension-led chief judges return to work.