Home / World / Poland has to stop cutting of forests 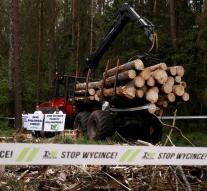 brussels - The European Court of Justice ordered Poland to resign immediately on the large scale cutting of trees in the Bialowieza forest. The logging is in violation of nature conservation laws and it poses a serious threat to an area that belongs to the UNESCO World Heritage Site.

It is an interim attempt by the judge to save trees because a lawsuit brought against the European Commission against Warsaw may take years. A court spokesperson said nothing about the motive for this verdict on Friday. The forest in the border area with Belarus is the last large forest of Europe and the accommodation of the largest herd of European bizons.

The Polish government insists that the logging is needed to prevent the spread of harmful beetles. The locals also benefit from it.