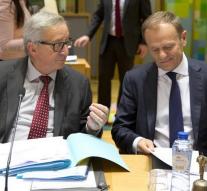 brussels/warsaw - If the EU leaders not to postpone the decision to be reappointed as President of the European Council Donald Tusk, Poland is likely to fail the summit on Thursday and Friday.

'We will do everything to make finding the reappointment does not take place today,' said Polish Foreign Minister Witold Waszczykowski Thursday against Polish media. If the leaders by pressing the decision, the entire top is threatened, he said.

The leaders discussed a host of issues. Polish Prime Minister Beata Szydlo could be induced to sabotage the negotiations.

Prime Minister Joseph Muscat temporary EU President of Malta, who takes over the chairmanship of the meeting of Tusk as the appointment issue is addressed, wants the leaders Thursday to resolve the issue. 'It is on the agenda, so there must be a decision. There are clear rules about what is happening today. '

He noted, nevertheless, that each Member State has the right to do what it wants. 'I can not dictate what the Polish Prime Minister may or may not say. 'Muscat did not want to speculate about whether Szydlo left the meeting and claiming a big national interest.' That would mean there may be no majority decision can be made about Tusk.

The Polish government Tusk sees as an enemy and refuses to support his second term of 2.5 years. The former prime minister could abuse his position and interfering in Polish politics. Warsaw has a new candidate put forward, the MEP Jacek Saryusz-Wolski.