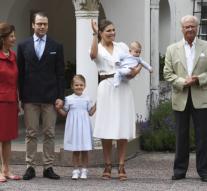 - The holidays of the Swedish King Carl Gustaf on holiday island of Öland expires this year, slightly less peaceful than in previous years. Pokémonjagers are around the royal summer residence Solliden Slott masse in search of the fictional creatures.

Security has several players of the popular game Pokemon Go should steer away from the house, told the head of security, Sven Stensson, to Aftonbladet. 'We hit a few people at night with torch in the garden. It turned out to be Pokémonjagers. '

The youngsters were not fined, though they found themselves almost trespassing. 'They may day when the gardens are open to the public, come back to hunt down all the Pokémon they can find. '


Not only King Carl Gustaf and his wife Silvia enjoy Öland a vacation. Crown Princess Victoria is also there with her husband Prince Daniel and two children, Princess Estelle (4) and Prince Oscar (4 months).