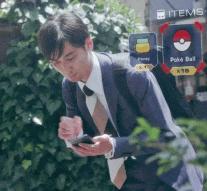 tokio - The Pokémon Company has a particularly good year. Thanks to the release of the raging popular Pokémon Go for mobile and the Nintendo Games Sun and Moon, the company made a net profit of 143.3 million dollars in 2016. That's almost 26 times the year's profit for this, writes The Verge based on Japanese analyst Serkan Toto.

In 2015, The Pokémon Company recorded another net profit of 5.6 million dollars. According to Toto, Pokémon Go was the 'key factor' for the sharp rise in profits in 2016. The other games for Nintendo 3DS are not comparable to the mobile game. 'It is widely known that major mobile hits are more profitable than other platforms,' ​​said Toto.

In the Netherlands, Pokémon Go was also downloaded massively. In the fall of 2016, the game, where users got up the street to catch the samples, installed 1.8 million Dutch smartphones.