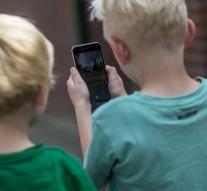 The 28-year-old man and 26-year-old woman strolled around one hour on the street looking for Pokémon when they roam saw an unknown man in a parking lot at the Doctor Bregtplein. They trusted it and followed him.

The pair struck the man in the car of the woman and held him until police arrived. The woman did report the car burglary. The man was arrested and taken to a detention center in Breda.


CALL: Kent or are you one of the people involved, then comes De Telegraaf like to be in touch with you. Mail: j.. dune @ telegraph. nl