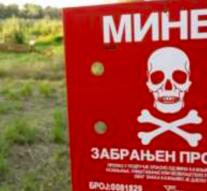 sarajevo - Bosnian players of the game Pokemon Go must be careful that they do not end up in a minefield. With that call, the organization Posavina bez mina, which has received information according to the BBC showing that players also venture into areas where there are explosives.

The Balkan country are estimated to have some 120 000 undiscovered mines. Posavina bez mina urges Bosnians in particular to continue monitoring warning signs, even when they are out hunting with their smartphones into digital samples.

,, We have received information that some users of the Pokemon Go app from entering areas where landmines can be '' warned the organization.,, We call on citizens not to do so. ''


The hunt for Pokemon brings players more often in trouble. In the Netherlands Pokémonzoekers had the track to be fetched from Hattem. Nunspeet earlier this month put a motorist on the side because of his strange behavior. He was found in his car to play the game.