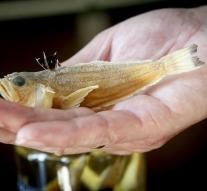 fehmarn - Two Swiss anglers have Tuesday off the coast of the German Baltic island of Fehmarn their cutter removed after being stung by a poisonous fish. The perpetrator was a weever, a bass species that is between 15 and 50 centimeters.

The sting of the weever lies in its dorsal fins, which secrete poison. It is serotonin. Although this poison is not fatal, can someone on a cross to be very ill and suffer from include severe pain, heart rhythm disorders and circulatory problems. The Swiss (15 and 60 years old) were landed by boat from the German rescue society.

The weever is most common in the eastern part of the Atlantic, but is also found in the Black Sea and the Mediterranean. Fishermen are advised to pick them up with gloves hook.