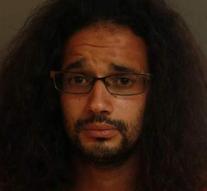 - An American who was on the run from the police walked in a very clumsy way into trouble .

The 21 year-old Derek Candelario, who was wanted for domestic violence, had accidentally phoned the police, probably when his cell phone was in his pocket.

The police could trace the call to a town south of Orlando (Florida) and immediately sent officers to the criminal down. Candelario still tried to flee but was arrested. Research conducted by his phone, indeed showed that he was the one who had called 911.