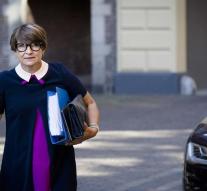 - Lilianne Ploumen Minister for Foreign Trade and Development wants to stay in politics. She is willing to sit down after the elections for the Labour Party in the House.

That they allow party leader Diederik Samson and party chairman Hans Spekman know, she wrote Thursday on Facebook.,, What is the most honorable job in the Netherlands? Congressman, 'said the minister. Therefore, she is available for the list of candidates for the parliamentary elections.

The 54-year-old has since 2012 Ploumen minister. Previously, she was party leader of the PvdA. She put itself in a sustainable textile industry.