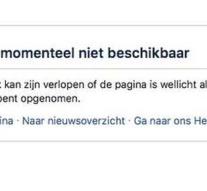 los angeles - Playboy withdraws from Facebook. The media company announces that it will deactivate the Playboy accounts that it manages on the social network site, partly because of the riot about the alleged misuse of user data.

Facebook is under attack because of the scandal around Cambridge Analytica. That data company would have used personal information from tens of millions of Facebook users to create voter profiles.

That recent privacy cell has helped to stop the decision on further details on the social network site. 'More than 25 million fans are involved in Playboy through our various Facebook pages,' says Playboy, who does not want to be 'complicit' in exposing users to such practices.

Playboy acknowledges in a statement that Facebook is not an optimal platform for the company, which is mainly known by the eponymous magazine. The 'strict content and policy guidelines' of Facebook have, according to Playboy, been an obstacle for 'expressing our values' for years.