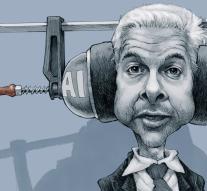 amsterdam - The government will again win a Big Brother Award, an award for people and organizations that violate the privacy of citizens, according to organizers. One of the three candidates, namely minister Ronald Plasterk of the Interior. The award was in 2011 , 2013 and 2014. Ivo Opstelten , then Minister of Security and Justice.

Plasterk " is working on a afluisterwet , but refuses to listen to criticism of it ", said civil rights organization Bits of Freedom Wednesday . His competitors insurer Achmea , which offers customers a discount if they share their personal data , and Microsoft , which stores user behavior with the new operating system Windows 10 . The Big Brother Award will be presented on October 28 at the City Theatre in Amsterdam.

There is also a prize of experts for the biggest privacy violator and a prize for someone who has just committed to privacy. Which Winston Award went last year to whistleblower Edward Snowden. Guest of honor at the ceremony was the Austrian Max Schrems . He recently won a historic lawsuit against Facebook . Thus Europeans of personal data should not be put just on servers in the United States.