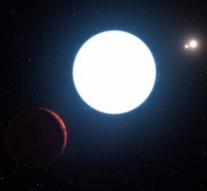 - For the first planet discovered with three suns in the sky. The exoplanet, photographed with the Very Large Telescope in Chile, is in the constellation Centaurus and is about a massive star at a distance of 80 times that of the Earth to the sun.

300 times that distance takes a binary also to the heavy main star. Thus, the planet has three suns in the sky: A large and two small ones close together. This year lasts on the planet 550 Earth years. More than 140 years it has been continuously day. The triple star and planet are 320 light years from Earth. We see the system so as it was about 320 years ago.

The planet is four times as massive as Jupiter and there is a temperature of nearly six hundred degrees Celsius. So there is no one who looks at the earth.