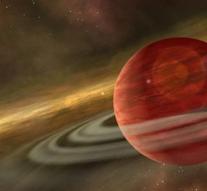 - Tucked Kicks like a beach ball. That is the story of the planet HD 106906b, discovered last year in another scheme. He is extremely close to its star, 97.2 billion kilometers, or about 650 times the distance from the Earth to the sun. But probably he was born close to its star. It seems that the planet is expelled, but it is not yet clear why.

American scientists have studied the planet with a telescope in Chile and the Hubble Space Telescope. They presented their findings Tuesday at a conference in Hawaii.

HD 106 906 b is about eleven times as massive as Jupiter, by far the most massive planet in our solar system. He is about 13 million years old, a pittance compared to the approximately 4.5 billion years of the earth. On the way to 'outside' the planet is likely to come from an area with comets. Therefore it seems that the planet has a ring like Saturn.

Scientists in such planets are interested, because there is a theory that the solar system used to have more planets. One or more of these would be thrown out, as well as HD 106906b. For us, that process is now no longer visible.