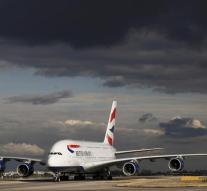 vancouver - A British Airways plane was en route from San Francisco to London was diverted to the Canadian city of Vancouver after the crew became ill.

As a precaution 25 crew of the Airbus A380 were taken to different hospitals. They did not stay there long, according to British Airways. It was not disclosed what was going on.

The passengers were accommodated in hotels and be transferred to other flights. How many people were on board was not clear.

The Airbus A380 is a so-called widebody aircraft with two floors. It offers depending on the implementation accommodate hundreds of passengers.