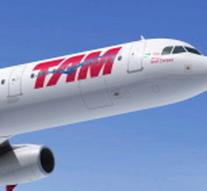 - A plane was en route from Madrid to Sao Paolo has had to reverse out of necessity. The occasion was a bomb threat.

The Brazilian company TAM Airlines plane was on Monday at 21. 21 hours lifted off from the Madrid-Barajas airport. But just after it had flown about Casablanca in Morocco, the pilot had to turn back. Spanish authorities had informed TAM on a report that a bomb would be possible on board, the company announced on Twitter.

Shortly after midnight, the Boeing 777, with flight number JJ8065, landed safely at Madrid and could get off the passengers. It is not clear what will happen now with the device and whether passengers are still left for the Brazilian destination. It was intended that they are around 5. 30 pm in Sao Paolo would arrive.