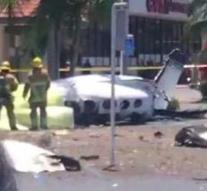 santa ana - In Santa Ana, in the US state of California, a small plane crashed into the parking lot of a shopping center on Sunday. According to local media, there are at least four deaths, all occupants of the aircraft.

According to the American Aviation Authority, the aircraft, a Cessna 414, reported just before it crashed that there were problems. The accident happened near John Wayne Airport in Santa Ana.