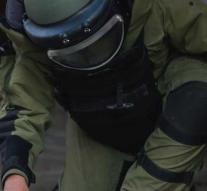 kathmandu - In the Nepalese capital Kathmandu a plane of US-Bangla Airlines crashed on Monday. A black plume of smoke can be seen on photographs. It is feared that fatalities have fallen.

The plane crashed at the Tribhuvan International Airport. It got out of course during the landing and hit a football field near the airport, writes the Kathmandu Post. Then fire broke out on board.

Rescue workers and the army are present. According to a spokesperson for the airport, there is fear of fatalities, but there is still much uncertainty at the moment.