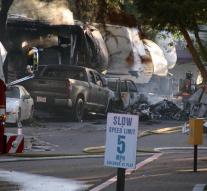 nevada - In the US state of Nevada on Tuesday crashed a small plane on a trailer park.

It is not known how many people were on the plane and whether residents of the trailer park were injured. The US authorities will not respond as provisional.

In video is to see that a number of commercial vehicles have been damaged by the debris of the aircraft and the fire that followed the crash.